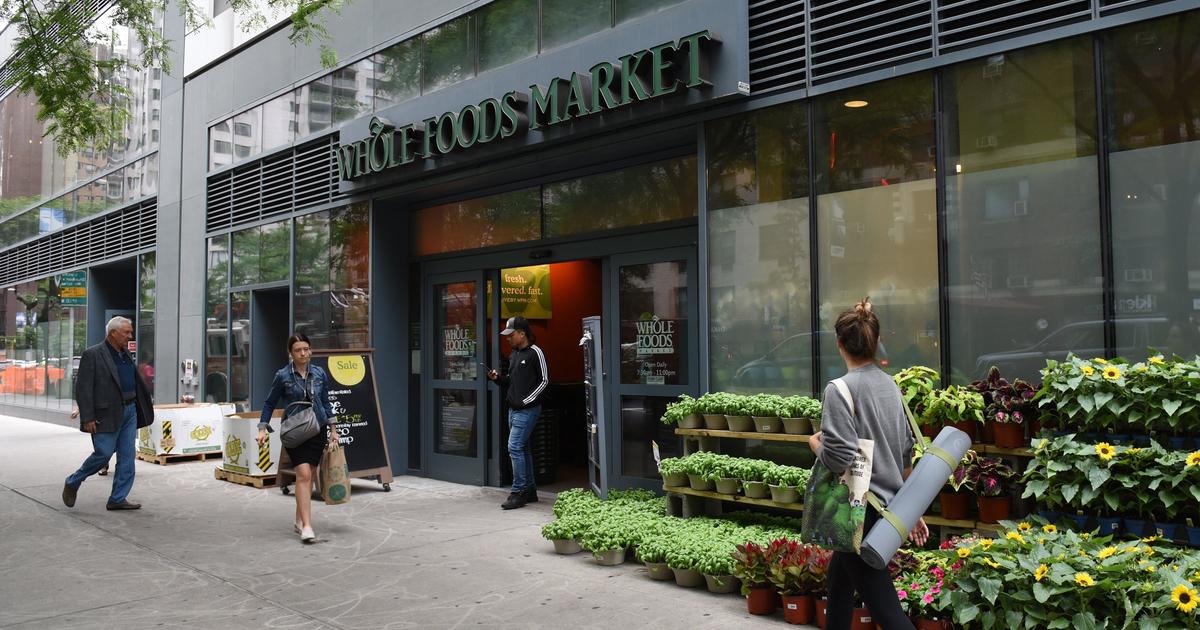 Amazon CEO Jeff Bezos has made multiple public statements about supporting the Black Lives Matter movement. But some employees at Amazon-owned Whole Foods said they are worried about being fired after wearing “Black Lives Matter” masks to work over the last week.

At least eight workers at the store walked off the job over the past week because they were told they couldn’t work while wearing BLM masks, according to several of the workers.

Charles Thompson, a 29-year old who works in the store’s meat department, wore a “Black Lives Matter” mask the week of Juneteenth, he told CBS MoneyWatch. A few hours into his shift, managers told him to change it because it was “divisive, and it makes people feel uncomfortable, kind of like a MAGA hat,” according to Thompson. That day, he complied.

But he continued to question his managers about the policy, he said, and on June 19, Thompson and a handful of his coworkers wore Black Lives Matter masks to work. They said they were told they couldn’t keep working while wearing those masks and left their shifts. The workers have held several protests outside the store since.

“I just want change, man, I don’t want people to hate,” Thompson said. “I didn’t wear the Black Lives Matter [mask] to piss anybody off. I wasn’t planning on wearing it every single day, but when they told me I can’t wear it, it hurt my feelings.”

Whole Foods declined to discuss specific workplace details shared by its employees with CBS MoneyWatch. A company spokesperson said in a statement: “In order to operate in a customer-focused environment, all Team Members must comply with our longstanding company dress code, which prohibits clothing with visible slogans, messages, logos or advertising that are not company-related. Team Members with face masks that do not comply with dress code are always offered new face masks.”

However, workers at the Westlake store and at Whole Foods outlets around the country say the company’s enforcement of the dress code is inconsistent and penalizes workers of color. They also question why the policy is being used to penalize workers supporting Black Lives Matter at a time when Amazon, Whole Foods’ parent, has made several public statements in support of the movement.

“The dress code was very lax at our stores before — we’ve never had any pushback when we wore clothes or pride pins or even Black Lives Matter pins,” said Camille Tucker-Tobert.

The 23-year-old, who is black, said a manager compared wearing a “Black Lives Matter” mask to an employee bringing in a Confederate flag to work in explaining to her why it was against company policy.

“I’m a little shocked by the culture of my store, it’s vastly different from what they introduced me to,” she said. “I’m beginning to question the moral ethics of that store.”

Tucker-Tobert and Thompson said they have each received two written warnings prior to their scheduled Friday shifts. After three warnings, employees can be fired.

Several companies, including Starbucks and Taco Bell, have recently changed their policies to allow employees to wear “Black Lives Matter” materials, reversing themselves after employees were disciplined or fired over racial equality slogans.

For Thompson, the Whole Foods employee, the message is about human rights — and it’s personal. He recounted an incident in 2012 when, according to Thompson, he was beaten by law enforcement while waiting outside a friend’s house in a parked car and ended up in the hospital.

“This isn’t right. My skin color isn’t politics,” he said.

He added, “When bad stuff happens, everyone gets together. When the Boston bombing happened, everyone stood with Boston. Nobody said, ‘All states matter.’ When it’s about black people, people get mad. I don’t understand it.”

Stimulus check: Do you have to pay tax on the money?

Texas governor says “If I could go back and redo anything, I would slow down…

News24.com | Tribunal must look into ‘serious’…

Could the Keppel Corporation takeover offer by Temasek be in…

The big puzzle in loans with interest rate subsidy

Aquarius, The Past Returns?

The guest from the depths of space: A possible solution to…