Susan Rice spent years in the White House. Could she return as vice president? 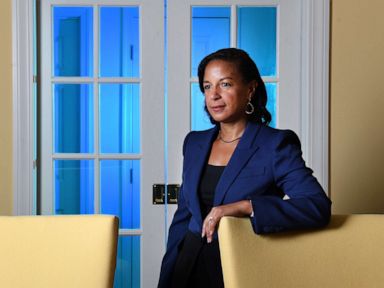 In it, Biden and Rice are hugging. He comforted her, she said, in the days after her mother died in 2017. The post aimed to display Biden’s keen ability, through enduring his own personal tragedies, to empathize with and be compassionate toward others, especially when they’re grieving.

As the Biden campaign eyes an early August announcement of his pick for vice president, that photo also serves as a subtle reminder that Rice has experience in the White House and a close working relationship with Biden. It’s a fact that could prove vital as Biden decides on a running mate.

“He’s seen her not just in good times, but on really hard days,” said Valerie Jarrett, a former senior adviser to Obama. “He trusts her. He would rely on her wise counsel. He would know that even if he disagreed with her he wouldn’t have to worry about whether or not she’s a team player. She would be.”

Rice has foreign policy experience that spans decades, not only as a national security adviser, widely considered one of the toughest jobs in government, but also as U.S. ambassador to the United Nations. She also served on the National Security Council under President Bill Clinton and as assistant secretary of state for African Affairs within the State Department.

Representatives for Rice said she was unavailable to be interviewed for this piece. In a recent interview with the Washington Post, Rice touted her background in getting different federal agencies to collaborate as experience that makes her uniquely suited for the office.

“One needs to bring the government together in common purpose, with an understanding of the budget, how to work with Congress and how to get business and the elements of government harnessed toward shared objectives,” she said. “That’s what I have done for the bulk of my career.”

“You’ve got to take all of those agencies and work a problem in a timely fashion so that you feel comfortable making a recommendation to the president,” said a former senior Obama administration official. “And running that process as efficiently and as thoroughly as she did is a real advantage that she has.”

“It’s not enough to have good ideas or to have the right solutions. If you don’t understand how to work across our government to actually make things happen, you’re not going to get things done,” said Brook Anderson, former U.S. ambassador to the United Nations and Rice’s former chief of staff during her tenure at the U.N.

Some Democrats worry selecting Rice for the No. 2 spot could resurrect Republican criticism on the handling of the terror attack at the U.S consulate in Benghazi, Libya.

Following the 2012 attack, Rice, based on intelligence she had at the time, went on several Sunday political television shows and said that the attack was “spontaneous” following protests in the area. The Obama administration later determined it was a premeditated attack.

Congressional investigations, many by Republican-led committees, concluded Rice did not mislead the public with those initial statements. Despite that, some Republicans continued to attack her. Earlier this month, in an interview with Fox News, Secretary of State Mike Pompeo accused Rice of “going on Sunday shows and lying.”

Former Obama administration officials who spoke with ABC News characterized the accusations against Rice as unfair and untrue. Philippe Reines, a former senior adviser to Hillary Clinton, said invoking Benghazi to count Rice out of the running for vice president “doesn’t make sense.”

“If you really believed it was potent, you would go after [Joe Biden], on it,” Reines said. “Using Benghazi is against the VP pick is sort of odd.”

Others said the attacks Rice endured proved her resilience.

“It was not easy, but she does have a great game face, and she doesn’t ever want to be a distraction — and she realizes that public service is really hard and it’s not for babies,” Jarrett said. “She realizes it’s not about her. I don’t think she took that criticism personally, I think she realized that anybody who was close to President Obama was fair game for Republicans to try and abuse.”

“She has a lot of experience in becoming a target and having a target put on her back,” said a former Rice aide. “And what she does is, she focuses on the work at hand and doing what she thinks is right for our nation.”

Biden’s campaign is reportedly vetting, among others, Sens. Kamala Harris of California, Elizabeth Warren of Massachusetts and Tammy Duckworth of Illinois, along with Reps. Val Demings of Florida and Karen Bass of California. He’s under increasing pressure to pick a woman of color.

In comparison to many of the women thought to be under consideration, most have held elected office. Rice has not.

“Having an executive background isn’t the end-all or be-all to doing the job of vice president,” said Nadia Brown, a political science professor at Purdue University and author of “Sisters in the Statehouse: Black Women and Legislative Decision Making.” “However, it would be atypical for someone to come in without having the modern history version of what we think is the launchpad into the VP seat.”

Rice’s proponents point to her work on three presidential campaigns as sufficient experience to help the Biden campaign in the run up to Election Day. She was a foreign policy aide to Democrat Michael Dukakis in 1988, she served as an adviser to John Kerry’s 2004 bid and worked as a surrogate and adviser to Barack Obama in 2008.

“From her work on presidential campaigns, she has deep experience doing the kinds of things that you would do if you were an actual vice presidential candidate,” Anderson said.

If she were to be selected, it would be unprecedented — she’d be the first African American woman on a major party ticket in November — and she could face unprecedented scrutiny.

“That’s just part of the responsibility — I don’t think she looks at it as a burden,” Jarrett said.” She looks at it as an opportunity to comport herself in a way where people would say, ‘The first African American woman was an extraordinary vice president.’ And does that come with a lot of additional headwinds because you’re the first? Sure it does. But she’s up to it.”

Nuclear bailout tied to bribery scandal was years in making