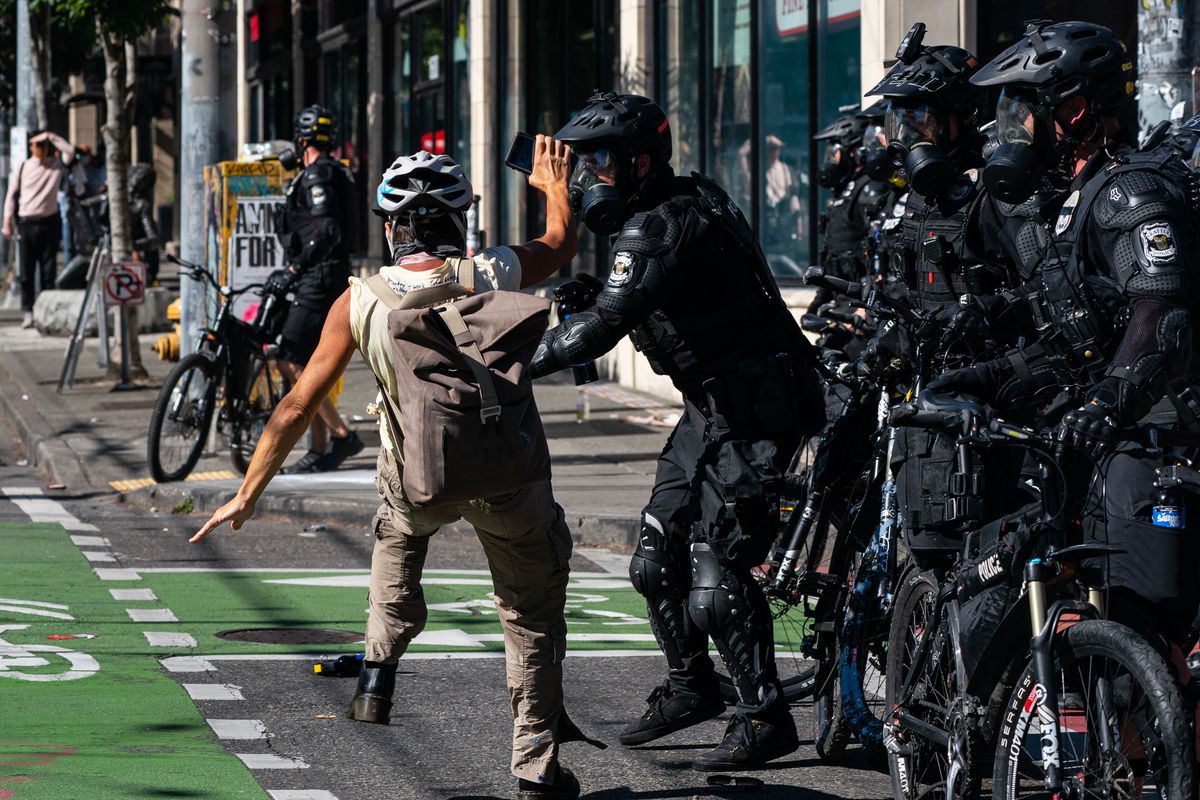 Weeks of violent clashes between federal agents and protesters in Portland, Ore., galvanized thousands of people to march through the streets of U.S. cities on the weekend, injecting new life into protests that had largely waned in recent weeks.

One of the most intense protests was in Seattle, where a day of demonstrations focused on police violence left a trail of broken windows and people flushing pepper spray from their eyes. At least 45 protesters had been arrested as of early evening, and both protesters and police officers suffered injuries.

Carrying signs such as “Feds Go Home” and shouting chants of “No justice, no peace,” some among the crowd of about 5,000 protesters stopped at a youth detention centre and lit several construction trailers there on fire. Some smashed windows of nearby businesses, ignited a fire in a coffee shop and blew an eight-inch hole through the wall of the Seattle Police Department’s East Precinct building, the police said.

“At this point, we declared the event to be a riot, and several orders to disperse were given,” the Seattle police chief, Carmen Best, said at a news conference.

The police responded by firing flash grenades, showering protesters with pepper spray and abruptly rushing into crowds, knocking people to the ground. After a flash grenade left one woman with bloody injuries, police officers shoved people who had stopped to help her.

In Austin, Tex., the police said one man was shot and killed just before 10 p.m. on Saturday during a protest in the city’s downtown. In a live video from the scene, protesters are seen marching through an intersection when a car blares its horn. Seconds later, five shots ring out, followed shortly after by several more loud bangs.

The man who was killed may have approached a vehicle with a rifle before he was shot and killed, officer Katrina Ratcliff said. She said the person who shot and killed the man had fired from inside the vehicle. That person was detained and is co-operating with officers, she said. No one else was injured.

“All I know is that someone dying while protesting is horrible,” Mayor Steve Adler of Austin said in a statement. “Our city is shaken and, like so many in our community, I’m heartbroken and stunned.”

In Los Angeles, protesters clashed with officers in front of the federal courthouse downtown. Videos showed people smashing windows and lobbing water bottles at officers after protesters said the police fired projectiles at them.

The federal courthouse in Portland has been the scene of nightly, chaotic demonstrations for weeks, which continued again into Sunday morning, as thousands participated in marches around the city, the 59th consecutive day of protests there. Earlier, a group of nurses in scrubs had joined an organized group of mothers in helmets and fathers in hard hats, all assembled against the fence of a federal courthouse where federal agents – a deployment that has been a key focus of the recent demonstrations – have been assembled.

Shortly after 1 a.m., the Portland police said the protest had become a riot and ordered the crowd to leave. Federal agents fired tear gas and left the courthouse to drive protesters from the streets, continuing to stretch the boundaries of their authority as legal experts questioned how far the agents could stray beyond federal property.

Protesters in several cities said the smoke-filled videos of federal agents firing tear gas and shoving protesters in Portland had brought them to the streets Saturday.

“Portland is leading,” said Chantelle Hershberger, an organizer with Refuse Fascism who was part of the Los Angeles activists protesting the presence of federal agents in Portland, where city officials have opposed the presence of the federal officers. “They’re showing what it looks like to stay in the streets despite police oppression, despite the federal forces being sent in. This kind of energy is actually what’s needed.”

Bipasha Mukherjee, 52, of Kirkland, Wash., said she has been protesting on the streets since May and said it was worrisome to her to see such aggressive tactics by police.

“This is not the country I immigrated to,” said Ms. Mukherjee, who arrived from India more than 30 years ago. “It feels like we are rapidly becoming a fascist state and a police state.”

Michaud Savage of Seattle said the protests there were aimed at both the local authorities and the deployment of federal officers who have waged a crackdown against a long-running protest in Portland. Mr. Savage said the law enforcement tactics in Portland, which have included the use of tear gas and crowd-control munitions, were dangerous and inappropriate.

“It’s a very hard slide in an extremely violent direction,” Mr. Savage said as he washed his eyes of pepper spray and nursed a wound on his arm from a flash grenade.

But Seattle’s Chief Best said a number of demonstrators also used violence. Some were tossing concrete blocks from a rooftop to the street below, she said. The coffee shop that was set afire had occupied apartments above it that had to be evacuated, she said.

“We support everyone’s First Amendment right for free speech and to gather and assemble in such a way,” she said. “But what we saw today was not peaceful. It was not a peaceful demonstration at all, and criminal acts were occurring throughout the city, and many people were at risk.”

Other demonstrations took place Saturday in New York; Omaha, Neb.; and Oakland, Calif., among other cities.

In Omaha, KMTV-TV reported that demonstrators turned out in solidarity with the Portland protests and also in response to the death of James Scurlock, a Black man killed by a white bar owner in May. The police arrested 75 to 100 people Saturday night, KMTV reported.

In Richmond, Va., riot police fired chemical agents at hundreds of protesters who had marched through the city and gathered around the Richmond Police Department. The police said some protesters had set fire to a city-owned dump truck outside the station.

At a protest in Aurora, Colo., a hectic scene played out as people marched along an interstate highway.

During that protest, someone drove a car into demonstrators, the Aurora Police Department said, although it was unclear if the car struck any protesters. The police said a protester had also “decided to fire off a weapon,” which struck at least one other person. That person was taken to a hospital and was in stable condition, the police said, and a second person later showed up at the hospital with a graze wound.

In addition to marching in solidarity with the Portland protesters, the demonstration in Aurora was also in response to the death of Elijah McClain, a 23-year-old massage therapist who died several days after officers put him in a chokehold last summer.

Mr. McClain’s death was one of several that have occurred in police custody around the country that received fresh attention after the killing of George Floyd while in police custody in Minneapolis in May. Mr. Floyd’s death ignited mass protests that drew millions to the streets in dozens of cities, but the demonstrations waned in most places.

Seattle and Portland, however, have seen extended demonstrations. Seattle protesters at one point laid claim to several blocks of the Capitol Hill neighbourhood and declared an autonomous zone. After a series of shootings there led the police to clear the area, protests had subsided.

Protests in Portland, meanwhile, have continued, with some of the heaviest demonstrations around federal buildings in the city. On Saturday, crowds marched from near the federal courthouse to a hotel several blocks away where federal agents who had been dispatched to the city were thought to be staying.

“Get out of bed with the feds,” the protesters chanted.

Later in the night, thousands of people returned to the federal courthouse. Some threw fireworks at the officers protecting the building, while others tried to break down the fence surrounding it. Just before midnight, federal officers began lobbing tear gas and flash grenades over the fence, dispersing crowds, while the group of mothers who have been a fixture at the protests stood firm with linked arms, protected with gas masks.

Craig Gabriel, an assistant U.S. attorney in Oregon, said at a news conference Saturday that federal agents had arrested 60 people at protests in Portland and were pursuing charges against 46 of them.

Several federal agents had been injured by fireworks and lasers that protesters shined into their eyes, he said.

Harry Fones, a spokesman for the Department of Homeland Security, whose agents are among those clashing with protesters, said Saturday that the demonstrators were little more than “violent anarchists rioting on the streets.”

Protesters in Washington planned to hold a demonstration Sunday at the Virginia home of Chad Wolf, the secretary of Homeland Security, in response to the deployment of federal agents in Portland.

After President Donald Trump issued an executive order to protect statues and federal property, the Department of Homeland Security sent tactical teams to Portland, beginning a series of clashes that have resulted in injured protesters, inspector-general investigations and calls from local leaders for federal agents to leave.

Protest crowds in that city have swelled into the thousands, and demonstrations there were continuing. This past week, federal officials deployed a tactical team to Seattle, and protesters cited that development as one reason for Saturday’s demonstrations.

News24.com | Mabuza: To help Eskom, national and provincial debts to councils will be cleared soon

Want to be a doctor? A lawyer? COVID-19 cases are rising, but these high-stakes exams…

How should MLB react to Marlins’ COVID-19 outbreak? | Follow The Money