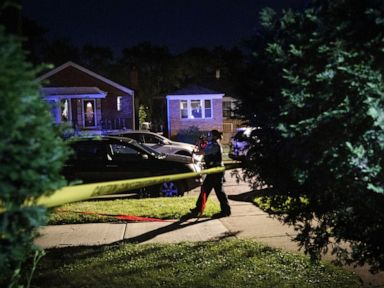 A total of 52 people were shot over the weekend in Chicago, authorities said.

A toddler and a 10-year-old girl were among 14 people shot to death in Chicago in yet another weekend of gun violence that has rocked the city over the past month.

Between Friday and Sunday morning, a total of 52 people were shot in Chicago, according to police department records.

“As a mother, I am tired of the funerals. I am tired of burying our children,” Chicago Mayor Lori Lightfoot tweeted, adding that the city was in the throes of a “gun violence epidemic.”

The latest carnage in the Windy City comes just a week after more than 100 people were shot, 14 fatally over the Father’s Day weekend.

The string of violent weekends also follows the deadliest day for shootings in Chicago in decades. On May 31, the police investigated 18 homicides, the most the city has seen in a single day in 60 years.

On Saturday, a 22-year-old woman was driving with her 20-month-old son in the neighborhood of Englewood on Chicago’s South Side when just after 2 p.m. a car pulled up beside them and an occupant opened fire, according to a police incident report. The mother was grazed in the head by a bullet while her son was shot in the chest and later died at a hospital, police said. No arrests had been made as of Sunday.

The shooting came one week after 3-year-old Mekhi James was shot to death in the east Chicago neighborhood of Austin when someone pulled up alongside the car his 27-year-old stepfather was driving and opened fire, hitting the child in the back, police said.

“We do want justice, but it ain’t gonna bring him back,” said the boy’s mother, Myesha James.

At about 9:40 p.m. this Saturday, a 10-year-old girl was hit in the head by a stray bullet that entered her apartment in the northeast Chicago neighborhood of Logan Square, police said. The girl, whose name was not released by police, was taken to the hospital, where she was pronounced dead. No arrest have been made in the incident.

About two hours later, at 11:18 p.m., an 8-year-old girl who was sitting on a couch inside a residence in Englewood was injured when a stray bullet came through her window and gazed her head, police said. The girl was taken to Comer Children’s Hospital, where she was in fair condition on Sunday, according to police. No arrests have been made in the shooting.

“It’s on all of us to double down on our all-hands-on-deck public safety efforts with police officers, street outreach teams, trauma support workers, community and faith-based partners,” Lightfoot said in a tweet posted on Saturday. “We must ask ourselves: ‘What are we each doing to make this a season of bounty, not tragedy?'”

The shootings this weekend came on the heels of a letter President Donald Trump sent to Lightfoot and Illinois Gov. J. B. Pritzker on Friday criticizing their leadership on the issue of gun violence in Chicago and offering to help.

“While I have been heartened to see crime reductions nationally the last few years, I have been horrified by the continued violence in this great American city,” Trump wrote.

“Your lack of leadership on this important issue continues to fail the people you have sworn to protect,” Trump continued. “I am concerned it is another example of your lack of commitment to the vulnerable citizens who are victims of this violence and a lack of respect for the men and women in law enforcement.”

Responding in series of tweets, Lightfoot said, “I don’t need leadership lessons from Donald Trump.” She went on to write that the president is “using the victims of gun violence in our city to score cheap political points, spew racist rhetoric, and ignore the impact of COVID across this country … It is despicable, disgusting and all too typical.”

Jordan Abudayyeh, Pretzker’s press secretary, added in a tweet that Trump “is a failure who has once again resorted to a press stunt in an attempt to distract from his long list of failures, especially his response to the deadly coronavirus and nationwide calls for racial justice.”

“The people of this state and this nation have unfortunately come to expect his unhinged attempts to politicize tragedy with his predictable and worn out strategy to distract, distract, distract,” Abudayyeh tweeted. “The Governor stands with the Mayor in working to accomplish meaningful change.”

Meanwhile, loved ones and friends of 20-year-old DePaul University student Gary Tinder, who was shot to death on June 21, gathered on Saturday for a vigil and to announce a $5,000 reward for information leading to the arrest and conviction Tinder’s killer. Tinder was slain as he walked home from a Starbucks where he worked in the north part of Chicago.

“How much he was loved,” Tinder’s mother, Jane Tinder, said. “He was wonderful, funny, intelligent and [had] so much promise. It’s senseless.”

As monuments fall, Confederate carving has size on its side

News24.com | Jurgen Klopp highlights the importance of not…

New strain of Zika virus is identified circulating in Brazil